Richard Wilson book page includes purchasing details. Six and a half years ago we called for contributions.  Now we contribute this book back to the FolkMADS community.

Introduction to the first edition

This book is the fruit of an old idea, a long fallow period, and a final burst of enthusiastic commitment. The idea was to provide Richard with a meaningful focus and contribution during his last year of life. He wrote and wrote, filling notebooks; Lauren transcribed what she could. We photocopied all his cards that could be found in October 2010; Katherine provided an initial transcription. This book has taken many forms in its many revisions and reimaginings: experimenting with different paper sizes, interleaving the stories from other people in with his own story, modifying the dance formats, and finally returning to this fairly simple format. The long lull, after much compilation and redrafting, was partly due to my grieving after Richard passed; with Richard gone the urgency of the project had passed, since my primary commitment was to him. Then I allowed other projects to take over, including the trials of earning tenure as faculty at UNM. Finally, after almost six years, it is done. While I may not have been able to realize the book I envisioned, this is it. I’m heartened by a thoughtful and generous community to whom I present this gift and tribute. Five years since Richard’s passing, I still feel his spirit and gentleness as I teach new dancers and callers, just as he taught me, feeling how each foot lifted is as important as how each is set upon. Erik Barry Erhardt Albuquerque, NM October 2016
... more
Albuquerque The Magazine gave me the opportunity to say what I love and don’t about Albuquerque. Thumbs Up: FolkMADS. I love contributing to and connecting to the living traditions of community-centered American and Western European folk music and dance in New Mexico, from the English influences from the late 1600s, to the local Rocky Mountain squares from the 1820s, through to the current Modern Urban Contra dances we enjoy each week. Thumbs Down: Goatheads. I’m optimistic for Albuquerque‘s Parks and Rec department’s strategy to plant native grass along a portion of the city’s 170 miles of trails to squeeze out the goatheads and their spiny little seeds.  Here’s another option:  host-specific, puncturevine eating weevils. [caption id="attachment_2715" align="aligncenter" width="408"] 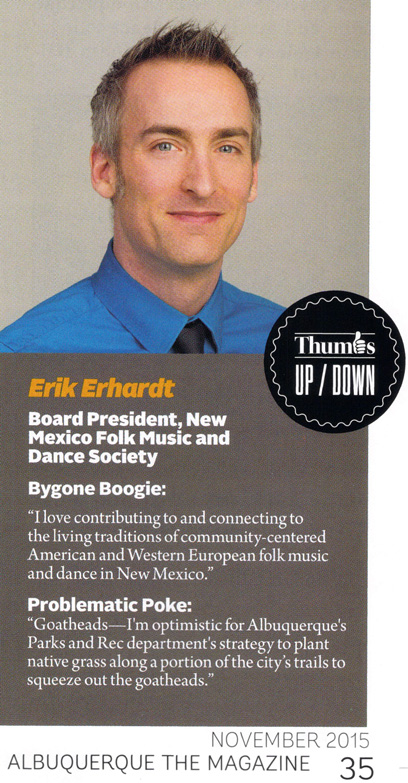